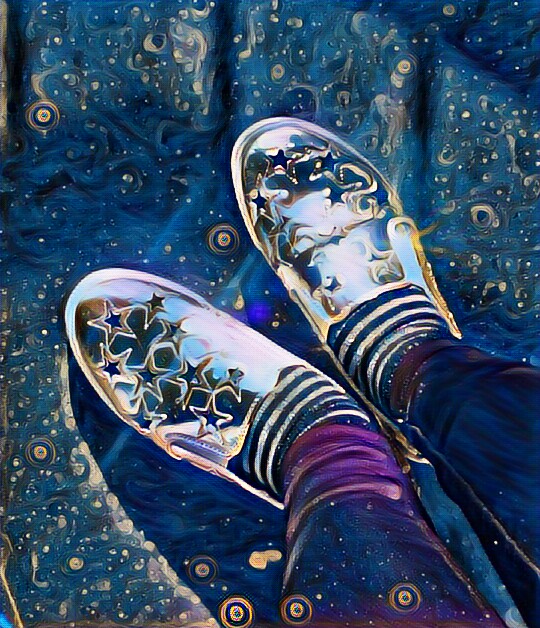 ​My shoes shine. Like a piece of the sun that melted because of its own heat and floated in  the space for a billion years, only to be caught in the vents of a Russian spacecraft that was aimlessly revolving around the earth to collect information that would be the same as yesterday and the same as tomorrow. Humans are a predictable breed, you see.

My shoes shine. Like the drops of sweat forming above the brow of an overworked gardener on discovering a complicated fragment of spatial technology devastate twenty years of his work within the gap between an inhale and an exhale but when he tried to inspect the wreckage, he was blinded by a light so glorious and strong. It became the last thing he ever saw.

My shoes shine. Like the tears of a frustrated jeweler who has been forced to shut his modest shop and run into the mountains to save his family from the meaningless ire of monsters in the hide of humans who like fighting for abstractions such as freedom and respect by wrecking havoc in an already difficult civilization, driving people into hapless poverty wherever they go. But his wife was a woman which means she was never out of ideas.

My shoes shine. Like the fiery glow of inspiration that struck the jeweler’s wife and she gave to her husband a much forgotten gift from her mother, it was no more a piece or even a fragment but only a fine powder of sunlight, and asked him to work with it but the husband did not have her faith and began to mock what he thought was her stupidity, he sprinkled the powder over his shoes to show her her place in the ongoings of the world. Painful regret rings the bells of our houses always dressed as righteous anger.

My shoes shine. Like the courage of the wife who left her ungrateful husband but not without taking his shoes with her, which she wore or rather flaunted as she traveled around and across the globe, ensnaring poets and beguiling artists in her wake but none could cage the preternatural brightness of her shoes within paper. Her fairytale ended when the shoes were stolen.

My shoes shine. Like dragon fire but more beningly, like a satisfied man’s burning pyre but more sweetly, like a song of triumph but less condescendingly, like the flaming touch of true love but more peacefully, their shine reflects in the mirror-like eyes of men and women wherever I go, resplendently they affirm my presence in the   maddening tumult of semi-fulfilled individualities.

I am the thief.

But… my shoes shine.